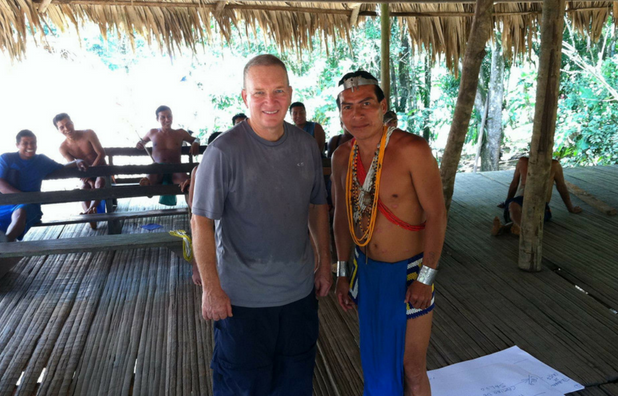 If you like jungle stories, here´s a few personal experiences...

Life in the Jungle
It rained off and on all night. So everything is soggy. The sky is trying to clear at 5:30 a.m. The rats and the bats kept aggravating me all night long. I made a bucket trap for the rat but it is so big that it jumped out of bucket. Will try to get a bigger bucket tonight! I have declared war on that pest! He ate my only bread two nights ago, so I relish the opportunity for revenge!

A bat kept flying into my mosquito net...I think his sonar is off! So I got up and opened the door of the cabin so he could find his way out. There is a gap at the top of walls, but he could not seem to locate it. I think he needs a tuneup!

We ate arepas (Spanish pancakes) last night, fried in old vegetable oil that looked like motor oil. I have a stomach ache this morning. Just took some medicine. Should be allright in a little while.

I spent some time studying this morning, then after cleaning up the Bible Institute grounds, and burying more water pipe for the bathrooms, I went to the river and jumped in clothes and all. I washed my clothes with them on me. Aniceto was washing clothes, so he and I talked about many things in the Bible and just about life in general. He was my translator this week. He is a Tikuna pastor in a distant village and a wise brother in Christ.

We had fish soup and rice with dry fariña (made from yucca) for lunch. Man, it was good! One of the student boys made it. We sat at the rough table, told jokes, and also talked about noviazgo (love and dating), and the fear that indigenous girls have of boys (the Tikuna girls think that the Cocama boys will cast a spell on them). Then the conversation turned to more practical things like hunting electric eels. The Indians crush a certain plant root, put it in the water which makes it milky, and the eels come to the top. One boy (Jonathan) speared an eel and could not get his spear out. He put both feet on the eel (he had rubber boots on) and reached down on the spear shaft to give a mighty tug. He touched the metal spearhead, the eel shocked him, and knocked him on his rear end. Everybody laughed at his story!

We had a sudden interruption in the service tonight. I was preaching with Power Point (Victoriosos en Cristo, Efesios 6) so we had the lights turned off. Somehow one of the Indians saw a snake crawling across the dirt floor right behind me, threw a spear at it and killed it. It was an aguachigamo, a red snake with a black head. I asked Alberto the hunter if it was venemous. He said yes. I then asked if it would make you sick if it bit you. He replied matter-of-factly, Nah, it would just kill you!

The Indians are fascinated with my alcohol stove and water filter. They know that I make my own breakfast (oatmeal and coffee) each morning. They call me Guerrero (the Warrior) because I am self-sufficient and don't depend on them for everything. Rather, I am providing most of the food for them during this seminar...chicken...fish...flour...rice...salt...oil...etc. They eat up everything and then come to me kinda apologetically saying, Pastor, no tenemos pollo...no tenemos pescado...no tenemos aceite...(Pastor, we don´t have chicken...fish...cooking oil...).
So we figure out what we need...I give them the reales or pesos...and they go get it in some neighboring village.

I love working with these guys. They have a great thirst for knowledge in the Scriptures. They are like the believers in Berea...that searched the Scriptures to see if these things were true.

I finished a week of teaching third year students in the Sabonete Bible Institute. This last afternoon was spent in the study of events in Abraham's life and how it applies to us. Using Genesis 24 as a basis, I taught the students how to find God's will in their search for a mate. Again they had endless questions. They are accustomed to finding a girl or boy, going out in the jungle, making a palm hut, and losing their virginity. It is rewarding to see these youth making a commitment to remain pure and seek God's will for their mate. Then they will begin that spousal relationship with a marriage ceremony for God's glory and testimony before others! I love teaching these kids!

Update from the Gimenez family