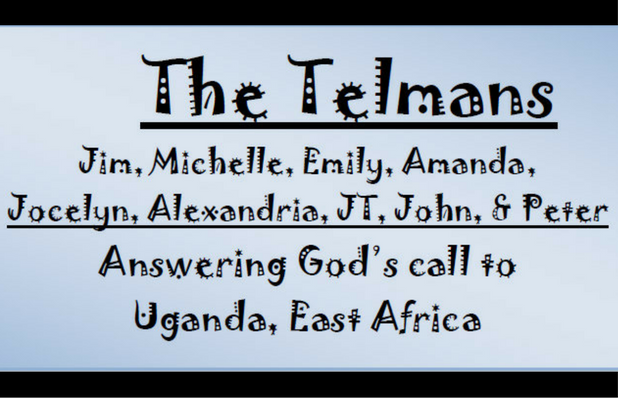 “What a mighty God we serve!”  We have been reminded of these words so many times over the 7 years since we realized God’s call for us to move to Uganda.  These last two months have been no exception.  God has faithfully and powerfully revealed Himself to us repeatedly.

A medical team comes from Tennessee every year.  This is a highlight each year for our family and the ministry.  This year seemed a bit bittersweet as it approached since it was the first clinic without Pastor JJ, but God again reminded us that He is in control.  This year they were able to treat 1,770 patients in a 1-week clinic, but even better 24 of those patients asked Christ to be their Savior.  In the clinic followed by the greatest pain, God brought the greatest joy!

In our last update, we said we were praying that God would allow John to have eye surgery in August.  We were wondering if His answer was no because we were getting into the month of August, and we didn’t seem to be making any progress towards getting anything scheduled.  We had asked a friend for advice, but he took it further and called the doctor’s office himself to try to get it scheduled.  He called one night to tell us they wouldn’t give him any more information because he wasn’t on John’s records, but he told us who to call.  That evening, we were able to get John’s pre-op, surgery, and 2 post-op appointments scheduled, and all of that was within a 1-week period that was only 2 weeks away.  They also said it would be ok for John to have his 1-month follow up appointment here in Uganda so we wouldn’t have to be gone as long.  What we originally thought would take 2-3 months was accomplished in 1 week.  That’s the power of God!  And as if that wasn’t enough, the doctor He provided for us to see did residency with a doctor who is now a missionary in Kenya.  He gave us his name in case we have any problems and need follow up here that we don’t feel comfortable getting in Uganda.  His sight was almost 20/20 for distance already at his 1-week follow up appointment.  We hope to get him in this week for his final post-op check.  We thank you all for praying, and we praise God for His answer that went so far above and beyond what we were praying for!

We also told you Amanda would be going to Hungary to attend Word of Life Bible Institute.  She was supposed to be there September 11, but we “accidentally “ scheduled her tickets which had her arrive 2 days early.  Because of what we saw as an accident, she was able to fly out before Hurricane Irma confused air travel.  A couple that works with missionaries we know picked her up and took care of her for the weekend until she had to be at WOL.  So now she has even more connections nearby, and she was able to tour the area before starting school.  She has started her year there, and she is loving it.  She’s excited for the Bible classes she’s taking and the people from all over the world that she’s getting to know.  It’s exciting to see God so clearly working in her life!  Please continue to pray for her to have wisdom as she has different opportunities arising.

Please also be in prayer for 2 of our classes that will be taking major tests in the next 2 months.  Our P7 class will be taking their PLEs (Primary Leaving Exams) again in the beginning of November.  This year we also have our first S4 class taking their UCE (Uganda Certificate of Education) exams.  They’ve all been working extra hard this year to make sure they’re ready, and they’ve worked through extreme grief.  Please pray that God will reward their hard work and dedication.

We once again thank you and praise God for your continued support through your prayers and financial sacrifices which allow us to live here and be a part of what God is doing.

Update from the Gimenez family