Angela Harper Wants to Hear What the Missionaries Have to Say 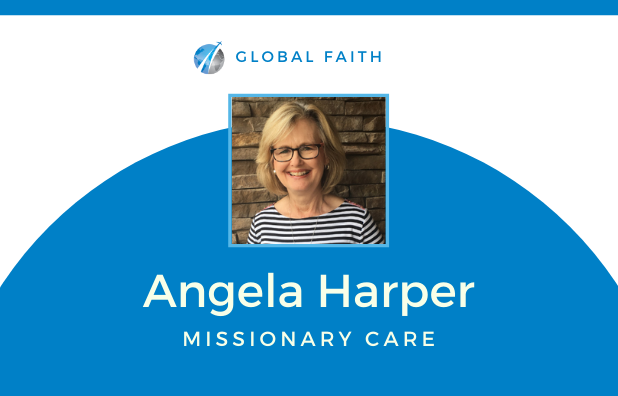 So often missionaries have so many things to plan and prepare that they don’t have time to think about their own well-being. They have to raise support, go out and start the work, maintain it, and make sure their supporters know what’s happening. There is so much planning and preparation to preach and teach. It takes time and care to form relationships, get the word out and invite people to come to church. Once the foundation is laid, they must maintain the church or work, practice discipleship and counseling, not to mention hospitality. It’s rewarding, but it also can be busy and stressful.

Angela Harper spent 35 years on the mission field in Australia. She knows what it’s like. She can be a listening ear and a source of godly wisdom and comfort. Angela is trying to meet needs, especially of the missionary wives represented at Global Faith, through its Missionary Care program. Missionaries are not expected to be super-human and just stuff down any tough feelings so they can get on with the work. Missionaries can feel isolated, unaccepted, misunderstood, and worst of all, that no one knows this or cares. This isn’t a sign of weakness. The Psalmist often cried out to God about his struggles and hardships.

One area that Angela clearly remembers, is the frustration of doing it all…or trying to. Before their children were born, she had more time to help with the ministry. But after, she had to find the balance of ministering to their family first, and then doing what she could after. Angela recalls a wise piece of advice someone once gave her. She said, “Don’t try to be everything to everybody.” You’re there to serve the Lord and yet you’re torn because your family needs you, she said. “A lot of times your children are the innocent victims. They weren’t called there. They’re the ones that have to leave their friends and adjust,” she said. She understands what it’s like to be a missionary and a mom.

Angela is excited about encouraging the missionaries, or just listening so that they feel heard and cared for. She’s reaching out in small ways like sending a care package, or making a phone call so they’ll understand that she’s there when they need her. Sometimes people just need to talk to even process their own feelings. Angela said she wants to hear how they’re doing and what they need, and assure them they won’t be judged for expressing their feelings.

Angela also knows a lot about love and loss. Her husband passed away 5 years ago, and of course today, it’s still hard. Her experiences help her understand Global Faith’s missionaries, and help shape her prayers for them. “You’ll find that when you go through deep waters, if you feel like you can use that for the Lord, that’s a way of healing,” she said. She went through those deep waters again when her son, Sam, passed away in February after a long battle with ALS. She said he went peacefully to be with the Lord surrounded by family. ALS is an excruciatingly painful disease. "Even though the loss of Sam is so enormous, I do find a measure of relief in that he no longer suffers and is with the Lord," Angela said. In the midst of reaching out to Global Faith's missionaries, Angela experienced what it was like to have them reach out to her. "This was such a comfort and verified my belief that we can and should encourage those who are grieving and suffering in their times of need which characterizes Missionary Care," she said. Pray for Angela as she continues to grieve, and comforts and supports her daughter-in-law and two sons.

Using her experiences on and off the mission field, Angela is trying to come alongside the missionaries. Often they may feel the pressure to say everything is going well, and keep silent about the discouragements they face. Angela isn't trying to solve their problems, but give them outlets, resources, and encouragement from the word. So pray for Angela that the missionaries would share their burdens with her. She said pray “I will have the wisdom to be sensitive to these ladies. Each one is so different. That the Lord will guide me in building relationships.” You can also help Angela by getting the word out to the missionaries about Missionary Care.

Thank you Angela for being there for the women especially!!